Should Doctors Have a Mandatory Retirement Age? 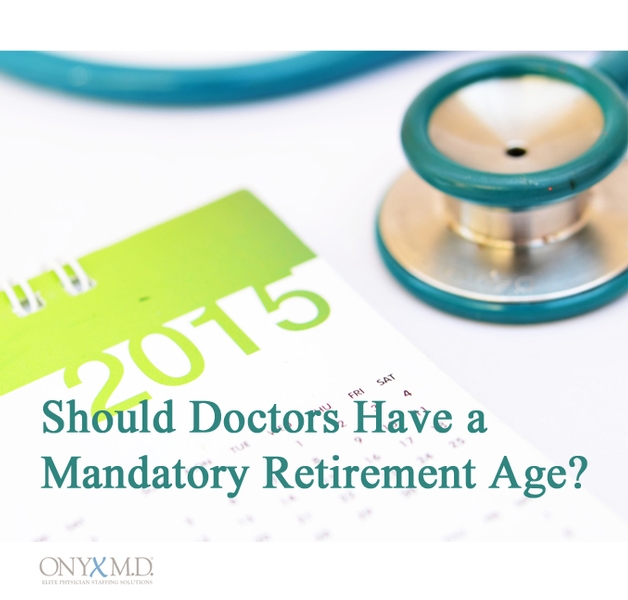 Competency is the foundation of sound clinical practice and is essential to preserving the lives of patients.  However, unlike many other critical professions like airline pilots, air traffic controllers and law enforcement officials, the medical profession does not mandate that physicians of a certain age retire.  There is considerable evidence that physician fitness does degrade following age 65; a 2005 report by Khaliq, et al, found that physicians who have served for forty years or more had a 6.6% likelihood of receiving some form of disciplinary action as opposed to the 1.3% rate among those with only ten years of service. With the wellbeing of patients at stake, many within the healthcare community have argued that there should be a mandatory retirement age for physicians.

There is a significant legal hurdle in the United States to introducing a mandatory retirement age: the Age Discrimination in Employment Act of 1967 (ADEA).  The ADEA protects employees aged 40 or older from discrimination in hiring, firing, promotion, compensation and other employment issues. While it may be possible to successfully pass legislation that would classify physicians as a profession which merits such limits, it would require strong support from the healthcare community, which is unlikely to materialize.

There are currently almost a million practicing physicians in the country, with about 42% over the age of 55 and 21% over the age of 65. There is already a shortage of physicians in many parts of the nation, and any attempt to impose a mandatory retirement age may render many communities without sufficient medical care.  This situation is likely to worsen in the coming years when Baby Boomers retire and more people obtain health insurance through the new exchanges, therefore it is easy to understand the lack of political will to disqualify many competent doctors from providing care.

While the vast majority of physicians over 65 who are still active possess the mental and physical skills necessary to provide adequate care, there a significant population whose skills have declined to the point of impairment. Currently there are no national or industry standards in place to ensure that aging physicians are competent to practice.  While there are continuing education requirements, these are often fulfilled as long as the physician is present, with no regard for skill level. Issues of competency do not typically arise until a disciplinary action by a state medical board is enacted.

Some hospitals and managed care organizations have taken steps to identify physicians with deteriorating performance, but this is still a limited group.  According to some estimates only five to ten percent of hospitals have introduced evaluations for aging doctors. There are institutional issues which inhibit the implementation of these testing programs.  Many hospital administrators and fellow physicians are reluctant to disqualify an elderly physician who has performed admirably in the past and may have a strong desire to continue practicing.

The growing number of senior physicians has also compelled the premier medical organization to examine the issue. The American Medical Association is currently in the process of formalizing guidelines to ensure physician fitness. There are currently AMA committees developing mental and physical evaluations that practicing physicians must pass on a periodic basis following a certain age threshold. It is unknown when the AMA plans to publish its suggested guidelines although it does plan to reveal committee findings at an upcoming conference.